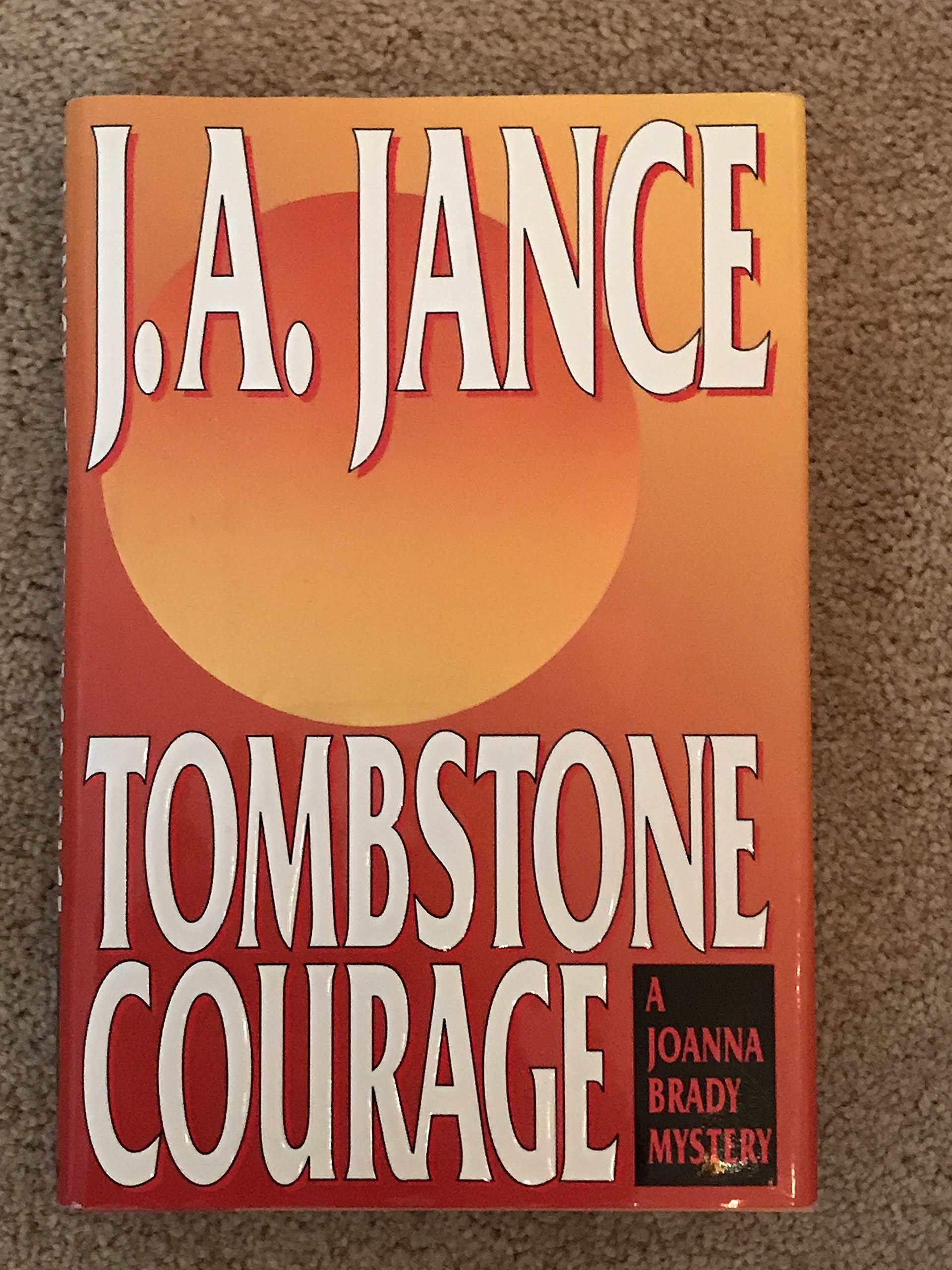 
Unfortunately the architect of the real project was longer on aesthetics than he was on security. Two days later two of the desperadoes, still driving the stolen pickup, were captured in New Mexico. A year or so later, the third was arrested in Florida. Then, four years later, the fourth was captured in. Tacoma, Washington. The man had been living in the Pacific Northwest long enough to marry.

Once he was back in prison in Arizona, his wife staged an ill-fated and, I believe, fatal prison escape attempt. The next time someone—more specifically my editor—asked me if I could write a book where Beaumont meets Brady, I no longer had the excuse of thinking it could never happen in real life because obviously it could have.

As a consequence my disbelief did indeed suspend, and here it is— Beaumont Meets Brady. In the suffocating stillness of an airless trailer, a woman is lying dead, a bullet hole in her chest. The slayings are as oppressive as the blistering heat for Sheriff Joanna Brady, who must shoulder the added double burden of a brutal re-election campaign and major developments on the home front.

Sheriff Brady must pursue this sadistic murderer into the shadows of the past to get to the roots of a monstrous obsession and expose the permanent wounds of a crime far worse than homicide. By doing do, those same readers failed to learn about the very human tragedy that often lies behind the newspaper headlines about people who may keep up to dozens of animals in awful, unsanitary, and mostly unintentionally abusive conditions. For me, that was the point of the story. Due to their own abusive pasts, many animal hoarders are unable to help themselves any more than they are able to help the unfortunate and often sick and starving animals they have collected.

A corpse is discovered in the Arizona desert with the fingers severed from both hands—the body of an ex-con who served twenty years for a murder he claimed not to remember. Soon after, one of Joanna's female officers is savagely assaulted and left for dead while on an unauthorized stakeout. Since the victim is one of their own, the department directs the bulk of its resources toward finding her attacker.

But the desert slaying haunts Joanna as well, and neither her pregnancy nor family concerns will keep her from doing her duty, no matter how perilous. Because justice must be served. And enforcing the law has become more than what Joanna Brady does—it's what she is. As an adult, my brother Jim returned to our home town in Bisbee, Arizona, where he joined the Bisbee fire department.


He was named fire fighter of the year twice, once for rescuing a guy who had electrocuted himself on a power line tower and another time for the rescue of a young child who had caught his arm in a sump pump. Because the child was in Naco, across the international border with Mexico, Jim had to coordinate with two governors in order to take US equipment and personnel across the line.

When Jim died of an undiagnosed heart ailment at age 50, his death came as a terrible shock to my parents in particular as well as to the community at large. His funeral, in , was the first fallen officer memorial I ever attended, and I used what I learned there to create the fictional fallen officer memorial in this book. And now you understand the dedication of this book. A car carrying an elderly couple goes off the side of a mountain and tumbles into oblivion on a beautiful sunny day in the Coronado National Monument. A note pulled from the twisted wreckage suggests the tragedy may have been a double suicide—but an autopsy later suggests something different.

A deadly fire and a fatal home invasion may or may not have some connection to the terrible crash. And miles away in the desert, a savage rain has revealed something grisly and terrifying: two trash bags filled with human remains. It's just another day in the life of Cochise County sheriff Joanna Brady, who must somehow balance the rigors of police work with a newborn, a teenager, a writer-husband, and a difficult mother. But Joanna will not allow murder to go unpunished in her jurisdiction—even if her path to the truth is twisting and dangerous.

My parents, Norman and Evie, loved to take forenoon coffee picnics. Their usual equipment included a frayed oilcloth red and white checked table cloth, an antique thermos, and a pair of Melmac cups they had picked up at a school cafeteria garage sale. Once my mother had poured the coffee, she would pull out the paring knife she customarily carried in her purse and divide a day-old cinnamon roll exactly in half.

In 68 years of marriage, I don't believe my parents ever ate a whole cinnamon roll. They always shared. As a couple, Norman and Evie were nothing if not self-sufficient and independent. Even after they moved into an assisted living facility, they still kept the keys to their Buick, and they planned to use it to make their own Thelma and Louise style exit.

That plan was foiled when my father suffered a stroke and died, leaving my mother alone and not the least bit happy about it. She made it blazingly clear to whoever tried to look after her that the one place she wanted to be was with her Norman.

When my sister called to say that our mother was gone, I didn't shed a single tear because she was gone--she was where she wanted to be. I went to her funeral and didn't cry at that, either.

But I was starting to write this book. When people from Bisbee read about Albert and Martha, they'll nod knowingly and say, "I don't care what she calls them. Those two people are Norman and Evie Busk.

In this book, I give Albert and Martha the blessing of the Thelma and Louise exit that was denied my folks, and yes, I did cry when I was writing those scenes. Six young women have been wrapped in tarps, doused with gasoline, and set on fire. Their charred remains have been scattered around various dump sites, creating a grisly pattern of death across western Washington.

At the same time, thousands of miles away in the Arizona desert, Cochise County sheriff Joanna Brady is looking into a homicide in which the elderly caretaker of an ATV park was run over and left to die. All the man has left behind is his dog, who is the improbable witness to some kind of turf warfare—or possibly something more sinister. Then a breakthrough in Beaumont's case leads him directly to the Southwest and into Brady's jurisdiction. When the two met on a joint investigation years earlier, sparks flew. Under different circumstances, both of them admit, even more could have happened.

But here, as the threads of their two seemingly separate cases wind together, Beaumont and Brady must put aside echoes of their shared past as they are once again drawn into an orbit of deception. Cochise County, both in fiction and in real life, shares an 80 mile border with Mexico.

I don't think I'm wrong when I say that smuggling both people and drugs is the county's biggest cash crop. Once the illicit drugs or immigrants land inside the US, the interstates become the distribution routes. With Bisbee on the southern end of that traffic and with Seattle at the far northern reaches, it's only natural the my two characters, J. Beaumont and Joanna Brady, would cross paths occasionally. This is the second Brady and Beaumont book.

When Joanna Brady's daughter, Jenny, stumbles across the body of her high school principal, Debra Highsmith, in the desert, the Cochise County sheriff's personal and professional worlds collide, forcing her to tread the difficult middle ground between being an officer of the law and a mother. While investigating murders has always meant discovering unpleasant facts and disquieting truths, the experienced Joanna isn't prepared for the knowledge she's about to uncover.

Though she's tried to protect her children from the dangers of the grown-up world, the search for justice leads straight to her own door and forces her to face the possibility that her beloved daughter may be less perfect than she seems—especially when a photo from the crime scene ends up on Facebook. A photo only one person close to the crime scene could have taken. The gruesome picture is just the tip of the iceberg. Even a small, close-knit town like Bisbee has its secrets.

Navigating her way through the unfamiliar world of social media, Joanna discovers shocking—and incriminating—information. The details build, from a hushed-up suspension, to a group of teenagers with a grudge against the late Ms. Highsmith, to a hateful video calling for the principal's death. The video evidence points to one particular privileged boy, who's already lawyered up thanks to his father, a well-to-do doctor determined to protect his son's reputation. Yet the deeper Joanna digs, the more complications she uncovers.

It seems the quiet, upstanding principal had a hidden past, full of mysterious secrets she'd successfully kept buried for years. As the seasoned sheriff juggles professional constraints and personal demands—budget cuts, new team members, an arrogant coroner, a confused teenager, a precocious toddler, and a high-maintenance mother—she finds herself walking a fine line between justice and family that has never been so blurred. Joanna Brady was fifteen years old when her father, D. Lathrop, died, and she has spent the better part of the next two decades at war with her mother Eleanor--the last parent standing.

If a child is young when the first parent dies, that the dead parent is immediately elevated to sainthood status. Nothing they ever did or said was wrong, and questioning any of that is entirely taboo. After all, no one is allowed to speak ill of the dead. In the meantime, the person who didn't die--the last parent standing--is also left holding the bag. He or she is expected and required to pick up the pieces and carry on with life. More often than not, in that role--one that was never wanted or expected--he or she becomes the embodiment of Evil.

As for me? When it coms to being the last parent standing, I've been there, done that, got the tee-shirt. As Joanna has matured in the course of fifteen books, she's begun to have a more realistic idea about both her parents. She's finally begun to see that her father wasn't perfection itself just as her mother wasn't perfectly evil. In Judgment Call, all those old ghosts show up again. With any kind of luck, they've all been put out to pasture on a permanent basis. But with boy-crazy Dora Matthews as a tent-mate, Jenny is seduced into taking a late night unauthorized hike into the wilderness where--instead of smoking a clandestine cigarette--she and Dora stumble upon the body of a murdered Phoenix woman.

Knowing that her little girl will be traumatized by her experience, Joanna must balance concern for Jenny with the demands of her new marriage and possible bid for reelection.


In Brownies I made one of the world's ugliest sit-upons--two squares of butt-sized red naugahyde sewn together with white yarn and then stuffed with cotton batting. What made mine ugly was the stitching. The stitching on the first side was carefully and evenly done. The second side was less so, while the third and fourth sides were a disgrace. Naturally, I was picturing that ugly thing when I wrote the first camping scenes in this book.

When the book tour came along, I was in the process of doing a Sunday afternoon book signing at the Joseph Beth store in Louisville, Kentucky when my phone rang.